My daugher, Cathy Fitzgerald, and myself, are delighted to announce the publication of a book about my grandmother, Annie Cowie and her wonderful paintings of the remote Huikumu area of New Zealand, from the 1890s.

Annie Cowie (1858-1917) was the first European woman to live in the remote Huikumu region of New Zealand in the 1890s. Living on a large farm close to the Whanganui River, her sensitive paintings and sketches reveal vivid details of the wild riverscapes and mountains, the Maori people of the area and personal portraits of the family home she loved so much.

The Whanganui River, with its origins high on of the mountains of the Tongariro plateau (Mt Ruapehu was frequently painted by Annie Cowie) is the longest navigable river in New Zealand at 234 km. It was the home of several Maori tribes and later settled for a time by Europeans. Of interest is that early settlers tried to farm this area but harsh conditions and poor soil fertility meant that many later abandoned their farms. Today, the surrounding area of the Whanganui area is much as it was in Annie Cowie’s day.

‘Ruapehu is the mountain,
Whanganui is the river,
Te Atihau nui a papa rangi
are the people’

The lowland forests of the area consist mainly of kamahi, tawa, hinau and pigeonwood trees… mosses, creepers and tree ferns live along the banks of the Whanganui River and in Annie Cowie’s paintings.

Here’s a poem that suits my favourite painting from Annie 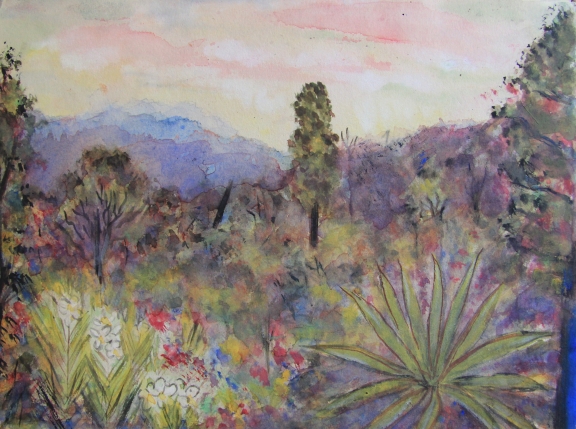 The Lord God planted a garden in the first white days of the world, and he set there an angel warden in a garment of Light enfurled, and I dream that these garden closes with their shade and sunflecked sod, and their lillies and bowers of roses were laid by the hand of God.

So near to the peace of Heaven the hawk might nest with the wren. For there in the cool of the even God walked with the first of men.

The Kiss of the Sun for Pardon
the Song of the Birds for Mirth,
one is nearer God’s heart in a garden
than anywhere else on earth.

2 Responses to My new book on my Grandmother, Annie Cowie, Huikumu, New Zealand