CHARLES TALBOT COWIE was born 14th January 1896 at Harrison Street,  Wanganui, New Zealand. Charlie was the only son of Harry Talbot Cowie and Annie Cowper.    The family lived at Huikumu near Pipiriki where they had their farm.   Dad often spoke of the beautiful Wanganui River which he often travelled on by steamer and canoe.    His father Harry Talbot Cowie used to take his wool bales down to Wanganui by barge to sell them and then bring back supplies. The local Maoris as soon as they saw the barge coming would run along the bank calling out Coo.. ee.        A local Maori,  Billy Rua worked for the family for many years, I still have a photo of Billy’s home at Pipiriki.     Charlie and his two sisters Della and Nancy,  where taught at their home by governesses until their schooling began when they were about 10 years old.     A Mr Hughes Henry an English remittance man,  lived at their home for sometime and was their gardener.

Annie (Dad’s mother) was an artist and has left us several paintings of her home and of the area at the time they lived there.   She was an excellent dancer and she and Harry Talbot Cowie won ballroom dancing championships.   She could also play the piano.    Her favourite part of the Bible was the Psalms and she was often found engrossed therein.    Harry Talbot Cowie loved Proverbs!   Annie was also an excellent cook and had a knowledge of herbs.    She was a  remarkable clairvoyant and amazing  tales have been told of her.

To quote one….     After the end of the Great War,  WW1 my father aged about 23-24 went to work at Punch’s  sawmill at Raetihi, North island.   Early one morning he and his timber logging mate rose for the day and went over to a half kerosine tin to have a wash.  Next thing my father said was he could hear his mother’s voice calling him ….My boy, My boy!    He looked all around himself but he was in dense bush and his mother was  living in Nelson in the South Island, hundreds of miles away.   Withouth any warning he was swept up and  catipulated head over heels backwards from where he was standing.   And in that spot where he had just stood a hugh lawyer vine fell out of the bush.  He said he would have been killed instantly.     Somehow Annie saved him!    His bush mate said he had never seen anything like it in his life!   Later that day Dad was sitting around the campfire and the embers became crickets singing with the voices of Angels, and he then knew his mother was dead.   Some week or so later it was indeed confirmed that she had died at the time she saved his life.

During the night of 15-16 April 1918 1st Battalion Middlesex Regiment was withdrawn to the Meteren-Moulehouck Line, the withdrawal being completed by 12.30 am. on 16th April.

The greatest number of prisoners lost in any single action of the First World War was 100 taken at Meteren from the second entrenching Battalion.    Half of the Battalion were new drafts who had never been in action and they held on until it was too late to withdraw.

When the last German offensive was stopped on the Somme, Ludendorf attacked in Flanders to draw off Reserves preparatory to another thrust at Amiens.    The position became critical and cyclists , pioneers, instructional schools and reinforcement camps were rushed into the sagging line.   The 2nd New Zealand Entrenching Battalion, a reinforcement unit, stationed at Abeele was given a dozen Lewis guns from labour units and rushed at 90 minutes notice by buses and forced marches to Meteren.    Neuve Eglis fell on the 14th, Bailleul on the 15th and Meteren on the 16th, but the fight the new men put up before they were ordered to withdraw helped to hold the line by gaining time for the 1st Australian Division to detrain and save the Hazebrouk railway junction.   Two companies held on until they were virtually surrounded before they tried to fight their way back.   One company made it but the other was captured. (Extract from an old copy of N.Z.Review)

This entry of Meteren relates to the place and date of my late Father Charles Talbot Cowie’s injuries.    Dad took part in this battle.

The night before the battle he rounded up milking cows that the farmers had been forced to abandon.   On finding a wayside Shrine of the Virgin Mary he tethered the cows and started to milk them, milk flowed like water he related.   Never since leaving New Zealand had he drunk milk until that night.   He also picked up bandoleers and strapped them to himself for the big battle of the next day.

It was to be his last.    He said the British boys were in the front line,  with Canadian and Australian-New Zealand in the back.   All of a sudden Canadian  soldiers came running back towards them over a rise.   The sights of their guns were  all too high,  and Dad said he kept screaming lower your sights, lower your sights,  as the German Army approached coming over the rise.

It was the last thing he remembered!!    He said he had a  feeling of rising higher and higher and saying  to himself I still have my rifle and soon I quess I will see the others who are  up here.   There must be loads of them around.     With that he regained consciousness to find his mate picking  him up and then carrying  him on his shoulders,running  with him to the very Shrine of Mary,  where he milked the cows the night before.    He put Dad on the  ground and left him there.    Dad said he was bleeding profusely and drifing in and out of consciousness.

He had a vision of rising and falling in terrible mud and being so terribly, terribly, tired.   He said he almost gave in to the tiredness but somehow kept trying to get up, slowly he got on to a road and inched along towards a light ahead.   On reaching the light he came to a river bank.   People were on the other side calling him over, but he stopped and waved to them and said,  no!     As he awoke he knew he would get back to New Zealand.

With that he awoke yet again, and  a   Catholic Priest was standing over him.    He and Dad got into an argument as Dad kept saying C. of E.  and the Priest said no,  R.C.   Dad pointed to his soldier’s book and to  look at it!   The Priest did so, and scratched out C. of E. and wrote in R.C and baptised him there and then.   My father believed  in the end the Priest was trying to help him,  as he had been left in the Shrine, and to so  ensure Christian burial for him.        Dad said he gave up protesting in the end as he was so weak from bleeding.

Eventually his Army Serg. came along and ordered a stretcher for him.   Dad was taken to a hospital in England.    He suffered shrapnel wound to the head.   It entered the right temple witin  1/4 inch of killing him outright.   The impact blew off a portion of his back and caused his right arm to hang useless.   Deafness and double vision in his right eye remained for the rest of his life.   Terrible nightmares haunted him also,  and he would get up in the middle of the night sleep walking re-enacting battles, fixing bayonettes and charging.   If ever a door was shut at home he would charge into it and wake himself up.  It used to terrify me as a child when these nightly traumas went on.

Dad returned to New Zealand in 1919.   He went shearing sheep.   He would grip the sheep and with his left hand shear with blades.   His mates egged him on as he could only do a few sheep slowly,  his poor right arm swelled  up and up,   until it was 3 times the size of a normal arm and blood and pus poured out of it but he kept on going and in this way he regained the use of his arm.    Dad lived until he was in his 89th year, dying 1st October 1984.

Just a few more memories in Closing.    Often Dad related the Battle of Messines Ridge and the gaining and loosing of the ground.    The Hugh Rats of Ypres and how he and the other soldiers slept with fixed bayonettes at night.    The Rats were as big as cats!!   He spoke of the Somme and the awful MUD and  how to survive he walked on the living and the dead as he sank and slipped in it.    How a hand would reach up from the mud only to sink again!    How the guns swung around and around as the ground was a soaking mudpool, killing many of their own.     He spoke of the bully-beef, the freezing cold, the long marches to the strains of Colonel Boggie.     He spoke of the devotion of the Catholic  Belgian women and how they flocked to pray in their Churches.   He as an Anglican greatly admired their devotion.    He mentioned the wonderful horses.   Charlie was a geat horseman himself,  and on his Leave  he would go around looking at the sites.    He told me that Christian Burial was ultra important to him, and watched as the Catholic soldiers were always buried with dignity not given to others.    He admired greatly the magnificence of the German Army.   Said he had never seen anything to equal it and how demoralizing it was to them to lose the War,  because of a lack in the end of support from Germany.   He spoke of the terrible gas, though thank God he wasnt gased himself.

He had volenteered for the Army but how sick of it all he was in the end.    His injuries mentioned above included an agonizing journey by bumping vechicle from the battlefield to the troop ship, his agonizing pain and raging thirst.   He said give me the washing up water soap and all and he would drink that!!        For years he had a silver plate in his head covering the temple wound.

Charlie was a humourous man, sang little ditty’s to his cat, loved to doodle on the soot around the fireplace.  He was both frugal and generous.    He often took things up the wrong way because of his deafness.    He was a devoted Catholic, joining the Church on his marriage to Mum, (the Priest abovementioned pre-emptied a later conversion.)     He never missed daily Mass and his Rosary.

I have entered his War Memories so that another who Reads this page will remember them, at the going down of the sun and in the morning, both all those who perished and those who limped home. 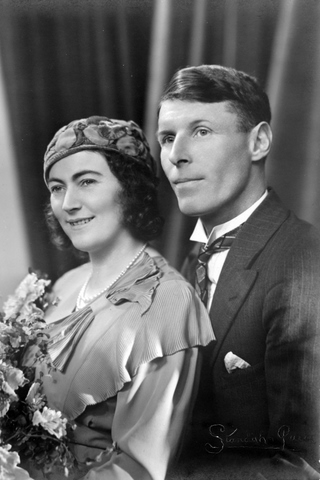